Good luck to our Gaelic Footballers 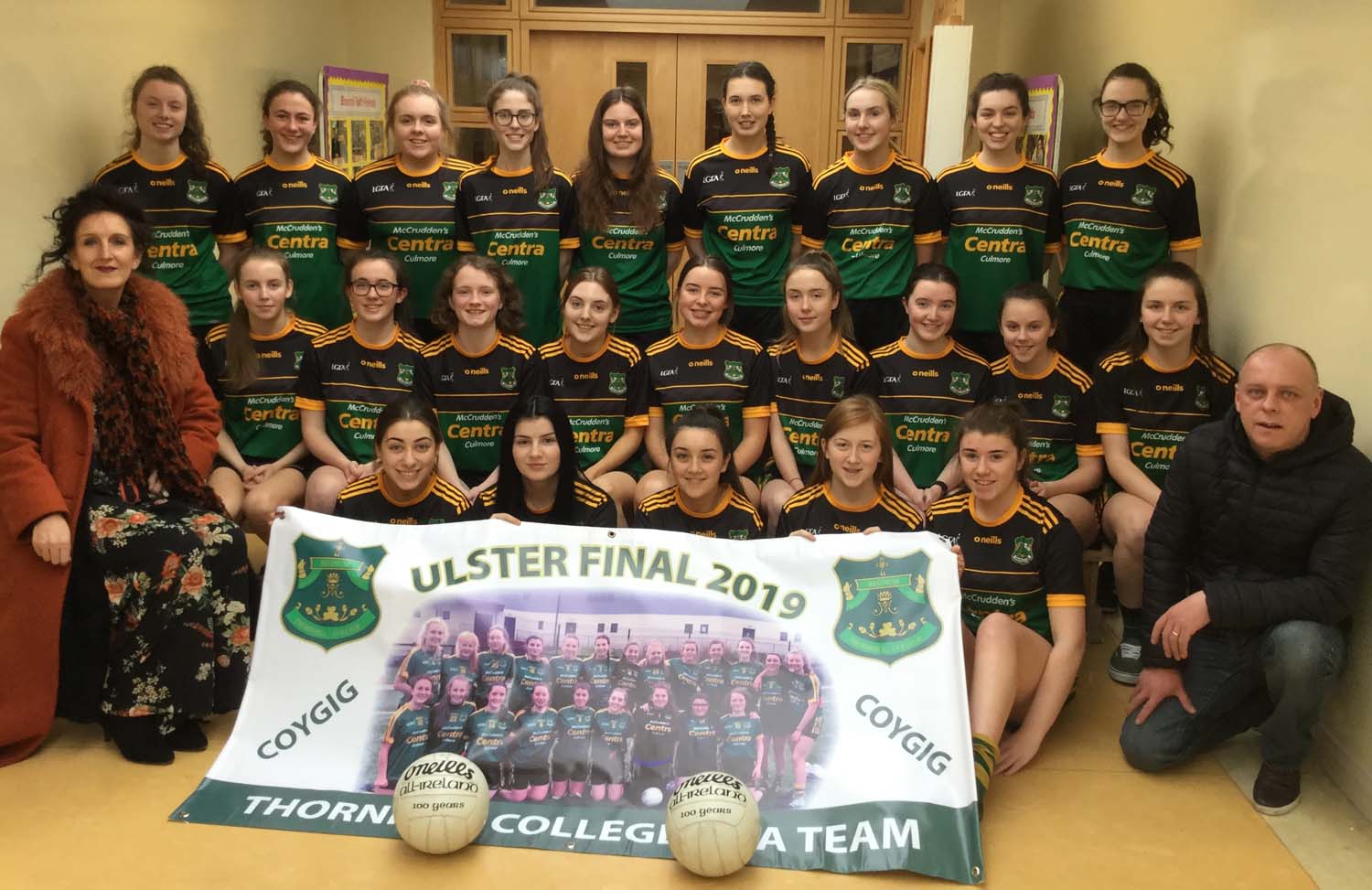 A confident Thornhill College will travel to the Melvin Centre, Strabane on Monday 4 February to face a strong Coláiste Ailigh (Letterkenny) side who have already beaten them in the group stages, in the final of the Ulster Schools Ladies u-20 final.

A number of supporters buses will also make their way to the final hoping to see the school bring back the title they first won in 2014.

In left half back Clódagh Laverty, there is a direct link to the previous success at this grade in 2014. Despite her tender years, Clódagh played a pivotal role in securing the title five years ago, and now stands just 60 minutes from her winning her second Ulster U20 title.

Clodagh played in the 2014 alongside older sisters Róisín & Aoife. This time she is joined by younger sister Cara who is continuing a tremendous family tradition of serving the school with distinction.

Thornhill have qualified for Monday’s Final against having finished runners-up to the same opponents in the group stages of the competition.

Routine victories over Carndonagh Community School, Abbey Vocational School, Donegal Town and St Catherine’s, Killybegs, were followed by a narrow two-point defeat to Monday’s opponents on a scoreline of 4-7 to 3-8.

This defeat was a watershed moment and was followed by a quarter-final victory over Our Lady’s, Newry by 6-15 to 3-7, in which team captain Leah McGonagle gave a masterclass, scoring an amazing 3-12.

In the semi-final against the previously unbeaten and much fancied Dean Maguire (Carrickmore) Thornhill produced their most complete performance of the season to advance to the final on a scoreline of 7-8 to 0-7.

Coláiste Ailigh are set up to play in the traditional Donegal fashion, getting players behind the ball & breaking at pace. They defend very effectively and denied our inside forwards any real space in the group game, while in the wing forward positions they have exceptional pace which caused us some problems. That game was played on their school pitch and we are confident that on the bigger expanse of Melvin we will be able to pick a way through their massed defence.

Looking forward to Monday’s final, coach and teacher, a confident Mr Brendan Hughes said the girls were up for the clash and had put in tremendous work in training over the Christmas holidays.

Speaking yesterday, Mr Hughes said: ‘Despite a two month break since the semi-final the team’s focus has remained constant and the bond has grown stronger. Training has stepped up a notch, and over Christmas John Mitchel’s GAC, Claudy made their 3G facility available to the team. With the date firmly in sight the team are now focused on emulating the class of 2014 and bring the title back to Thornhill'.

‘Hopefully, the girls will have great support on Monday with a number of buses of supporters travelling. I would appeal to parents too to come along and support the team.

Brendan’s coaching skills have augured well for our school team, as he has managed the Armagh Ulster Minor team to provincial victory as well as holding the post of assistant manager of the Armagh senior team.

‘This side have put in all the work throughout 2018 and if they perform as a team on Monday, I’ve no doubt they can come away with the silverware, matching their 2014 counterparts. I’m sure all at Thornhill will be giving their full support on Monday. 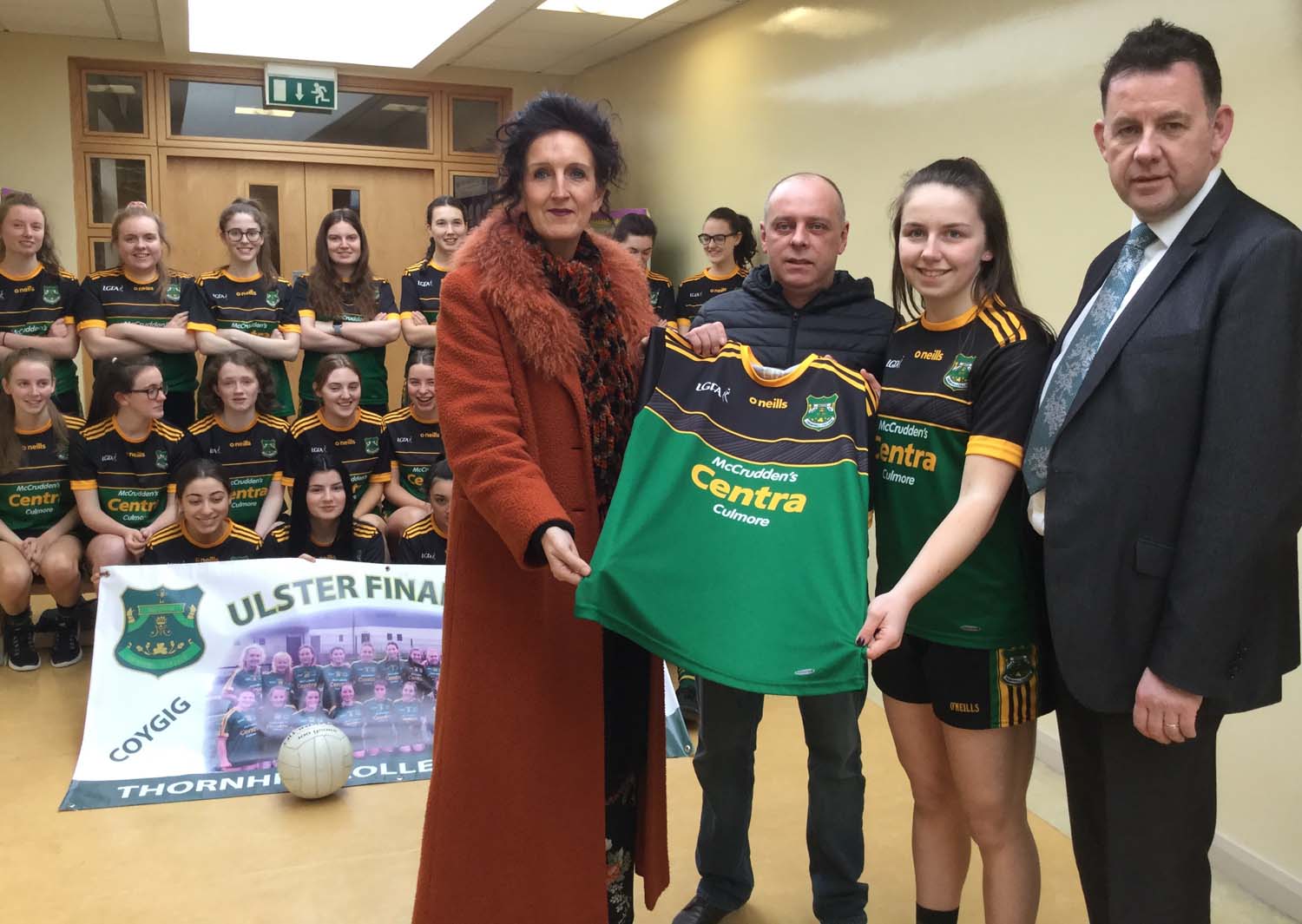 We would also like to thank William McCrudden at McCrudden’s Centra, Culmore for his continued support and sponsorship of our team, reinforcing the two-way link that exists between Thornhill College and the local community.

School Principal, Ms. Mallett also expressed confidence in her students and is looking forward to a very good game with a performance that emulates the 2014 success.

Speaking to the ‘Journal’ yesterday she said:’

“We are thrilled that our girls have reached the final for the second time in 5 years.  This is the result of sheer hard work and determination of this truly cohesive team.  Regardless of the result, our girls are already winners in our eyes.  They are fabulous ambassadors for Thornhill College.  Superb role models for the rest of our student population to emulate.  We wish them every success and are really looking forward to the game on Monday.”

Guide for Using Our School App